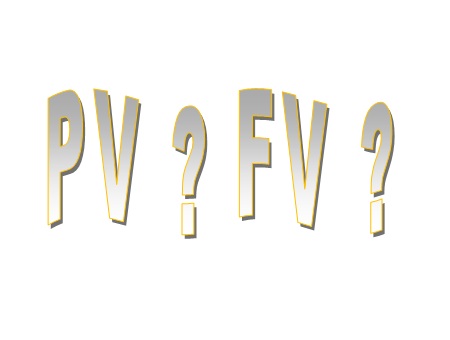 We know that a future value (FV) equals a present value (PV) plus the interest that can be earned by having ownership of the money; it is the amount that the PV will grow to over some stated period.  Conversely, a present value equals the future value minus the interest that comes from ownership of the money; it will be the today’s value of a future amount to be received at some specified time in the future.

The FV can be calculated by multiplying the present value and the accumulation function and this value does not include inflation or other factors that will affect the true value of money in the future. The process of finding the FV is often called Compounding and on the other hand, PV is the value on a given date of a payment or series of payments made at other times. The process of finding the PV from the FV is Discounting.

PV and FV are interrelated; where they are affected by remaining variables or components of TMV, which are periods, payments and interest. So when assuming that the interest rate and the number of periods remain constant, FV will increase as PV increases.

However, when the variable payment is fixed, as the higher the interest rates go, the lower the PV and the higher the FV, this means that when another variable are considered that is the number of periods. The more time that passes, more interest will be accumulated per period, therefore the higher the FV will be if the PV is constant, and vice versa.

What is an annuity?

Now that we have covered both PV and FV, we need to know about Annuity. In finance, an annuity is any series of equal payments (either pay by you or to be paid to you) that are made at regular intervals. The interval periods between payments are most commonly in years, half-yearly, months or weeks, so long the interval is consistent, an annuity can last for a short duration say few months or longer run likes decades.

Annuity in simply is an agreement (i.e. Bank or insurance company) where you make single or multiple payments in exchange for receiving a set amount of income for a period of time. There are two basic types of annuities: ordinary annuities and annuities due.

In general, if you’re the one that making payments, an ordinary annuity is preferred, whereas if payments were paid to you, is better off with an annuity due. Due to the TVM of money, a sum of money today will worth much more compare the equal amount in the future, therefore the longer you can delay making your first fixed payment, the less that payment cost you, on the other way, the earlier you can receive the first payment of an annuity, the more it will worth.

Apart from ordinary annuity and annuity due, there are further types of annuity, they are:

Therefore, annualized payouts are important because they’re the key to retirement accounts. You start with a lump sum at the start of retirement and assume it’s invested at a set rate of return. Then you start to draw money out annually.